The Ride, The Journey


I finally did the AIDS Lifecycle, which was a bike ride event from SF to LA over 7 days (545 MILES). It was challenging, scary, exhausting, inspiring, uplifting, and fun. It was amazing because as a collective group of 3K riders we raised $14.2 million dollars, which was an all-time record. This event is the highest grossing fundraising event for HIV/AIDS in the world and it was great to be a part of it. I definitely feel a sense of accomplishment because I hadn’t ever really rode a road bike before February of this year and to do this was so awesome. It also felt great to actually accomplish something that I had wanted to accomplish for years now. This ride was dedicated not only for my babies but for a good friend of mine, in the hope that in the future, HIV/AIDS will be a non-factor. I am thankful for all of the support I received from family and friends. Below you will find some pics from the ride.


Sunday: 83 miles – My sister dropped me off around 5am and was there to see me off when we had opening ceremony and the send off at 6:30am. I was nervous and excited and had a mini emotional breakdown as I realized I was achieving a dream. Cyncere was there to support me and pump me up. Coming out SF, my FEDex team led the ride out which was awesome. It was super cloudy leaving SF and I got a flat tire within the first hour but a random stranger helped me and I was off after 15 minutes. We rode down the coast and hit beautiful Santa Cruz where there were tons of people windsurfing. I don’t think the pic does the sight justice though. 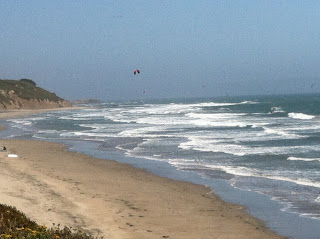 Monday: 109 miles – The longest day of the route. It was mostly flat but just a very long day. We rode for 12 hours with many scenic routes across strawberry fields in Monterey to coastal ports where I saw the big group of seals (below). Camp was in King City. 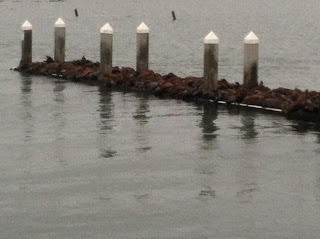 Tuesday: 67 miles – A Shorter day but the big dreaded ‘QUAD Buster’. It is a huge uphill mountain that is about 3 miles going straight up and very steep; but I made it. Camp was in Paso Robles. 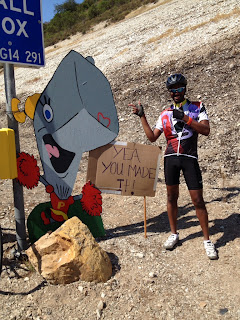 Wednesday: 98 miles – The day of the Evil Twins. It is this group of big uphill climbs. This was also the day of the halfway point which was an amazing accomplishment in and of itself. This day we went through Pismo Beach and had cinnabuns. Delicious. This was the day I had to get a massage from one of the many massage therapists at each camp. My body was feeling it! Camp was in Santa Maria. 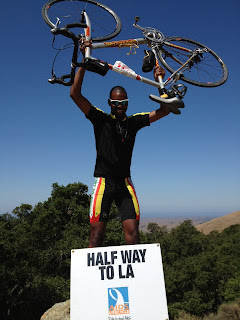 Thursday: 42 miles – RED Dress Day! Everyone wears a red dress to show support for the red ribbon. My red dress picture to come. It was a shorter day but a hilarious one, nonetheless. We were a scene everywhere we went! These people were crazy. Check out the Orphan Annies below. Camp was in Lompoc. 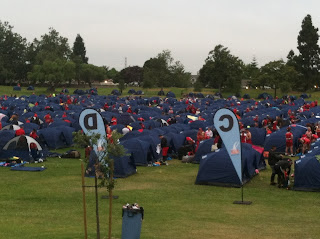 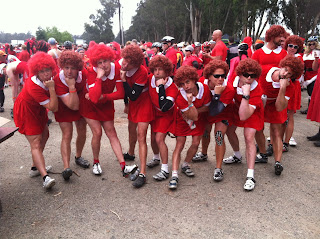 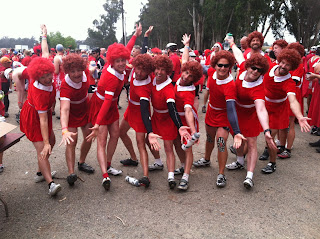 Friday: 84 miles – This was by far the most beautiful parts of the ride going through Santa Barbara/Goleta/Montecito. Santa Barbara also had a spot where they gave us free ice cream, brownies, and candy. Camp was is Ventura (home sweet home) where I had at least 10 family and friends waiting for me and cheering me on. What support! The pic below is of me and GMA who was surprisingly gitty about the entire event. There was also a Candle Light vigil that night, which again, the picture doesn’t do justice to. 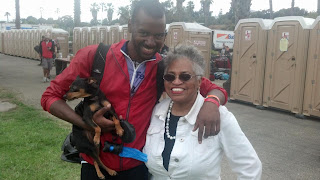 Saturday: 61 miles – Finally made it to LA. The funny thing is that the route went right by my GMAs house and Cyncere and her were out cheering the riders on with signs. Cyncere waved the American Flag and GMA had the cowbell! We rode down the famous PCH highway and had lunch at Pepperdine University. 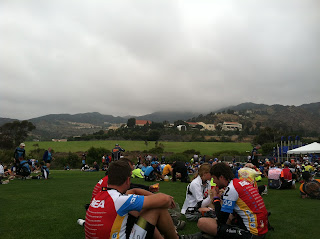 What I have learned from this experience is the true kindness of strangers. All 2200 riders looked out for another helped each other as we rode down the coast. This experience also restored my faith in the LGBT community. When we want to accomplish something, we CAN come together and make things happen. 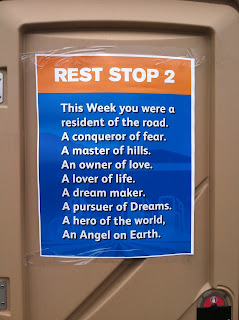