Ready to Train for the Ride of my Life

On Thursday, I hung out with my friend Jeff. We ate some dindin, kiki-ed(=chatted it up), and watched Scandal (with Cyncere and McFierce).


He had gotten me a present… “Pregnancy Tea” (picture to come). It promotes a healthy pregnancy and he thought it would be perfect for me AND IT IS. I haven’t had any yet but today and every Monday I will have some until they are gone. I thought it was the funniest thing I had ever seen but also very touching. It feels great to know that you have people in your corner rooting for you and your future kids. 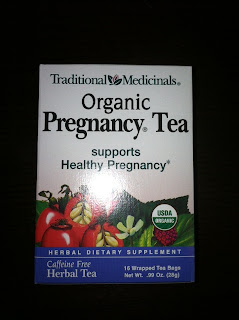 Friday, I gave GMA the update and she was super excited. She said she had a feeling that I would have two girls which I don’t believe. I think she was just trying to say the opposite of me, but we will see. I later heard that day that she was speaking in code to my Mom about the jelly beans. Apparently there were other people at her house and she said to my Mom, “ All I can say is heartbeats 150 and 156”. She is such a CIA spy! It is absolutely killing her that she can’t tell anyone. The excitement is killing her. I love it!

The day after my mini-breakdown and right after my last post, I received the Ultimate Pregnancy Checklist/To-Do List from Babycenter.com and it has helped me out so much. I am and feel much more organized and have a game plan on the things I need to research, plan, do, and buy. It was a true gift from God /Universe/ Buddha/ Oprah or whatever else people believe in these days! Either way, I am so thankful and I am thankful for all the helpful recommendations from fellow bloggers/parents/to-be parents! The virtual help you all provided really helped to put me at peace with the process and let me know I’m not alone.

Friday night after work, I was finally able to get the bike to start training for the Aids Lifecycle and it is gorgeous. I promise to take a picture and show you all. After my friend dropped off the bike, we went to a bike shop and got more gear for me and the bike. He also helped me with my training schedule which I am so happy with. Basically, the schedule is an hour on the stationary bike on Tuesday and Thursday and an outdoor ride on Saturday mornings. With time, the Saturday morning rides will get longer and longer. I can’t wait!

On Saturday, I went to the Brandy concert. It was so much fun and amazing. I guess I didn’t know what to expect, but she had a ton of hits she sang. She also did a medley of Whitney Houston which was to die for! The theatre wasn’t that big so our seats to the back weren’t actually that bad, all things considered. I went with Jeff and Jeff found some empty seats about 6 or so rows from the stage so we took those instead. So Awesome! A friend of ours stayed after the concert to give her flowers and was able to meet her! I was happy for him since he is absolutely in love with her. I’m not really into meeting ‘celebrities’; I just think they are regular people. After the concert, Jeff and I went out to a local club and danced the night away. Let’s just say I didn’t get to bed until 4am. I had a blast, but I was also reminded of two things. 1) I am too old to be clubbing it and running around like so many of these 25yo and younger kids and 2) my recovery rate is much slower than it used to be. I believe I woke up closer to noon on Sunday. For someone who prides himself on productivity, this was an epic fail (#epic fail).

Sunday, I had a date with a guy named Refugio who I was chatting with before my Mom and Grandma came. He is a guy from Mexico who is currently getting his Masters degree in Public Administration. Before school, he was a social worker doing a lot of community work. He was a cool guy and who had a ton of interesting things to say. I think I will see him again.

All in all, there is quite a lot to do at the moment and I am running a bit behind but I believe that I will be able to catch up this week. Cyncere will be travelling to visit family and friends so I will have nothing but time to get everything done that I need to do.