Full Court Press (Off to Vegas)

Well this week has been a whirlwind. Most of the week, I was trying to catch up on rest from the fun filled weekend. And today I will be flying to Las Vegas for a basketball tournament. I’ll spare you all the drama that prevented 2 of our players going, but I am glad that I have the opportunity to go, compete, and spend time with dear friends. I know that when the kids come, I won’t be able to do many more of these tournaments in the future, so I’m trying to make the most of them now. Please believe I will let you all know all the messiness that happens this weekend. It is sure to be a doosy(sp?). Wish me luck! I feel great and have been playing well (as have my teammates) so I know we will do well.

Speaking of YOLO (You only live once), I have also been considering doing the Aids Lifecycle. Again, I’m trying to do things that I always wanted to do before the babes come. If you aren’t familiar, the Aids Lifecycle is a bike ride from San Francisco to LA in the span of 7 days. Every rider needs to raise at least 3000 dollars and train for the event. Although I really wanted to do it, I decided against it. The expenses were just too much in terms of time and finances. Training at least 3 days a week and having to get all new bike gear which would be close to 1000 dollars. I really don’t have the money for that as I am saving for when the babes come. Also I really only have time in my life for 2 sports right now and I want to continue to play tennis and basketball, especially because I am on the Board of Directors for each or the organizations.

So Cyncere did a really nice thing this week for me that really touched my heart. She gave me this card. 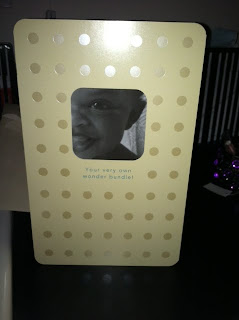 What she wrote in the card hit home so hard. She basically said that although we knew the babies were going to come we need to celebrate this moment and all moments big and small. I think I go through my life and want to accomplish my goals. I rarely sit back and revel in the achievements I have made. I just go on to the next goal I have to reach. This card and its message were definitely needed. =)

So now to the dating part of my life…

Last night I went on a date with Michael (for whatever reason I think his name is Kevin in my head). It went well. We had coffee and had some stimulating conversation about a variety of things. He is an owner of a bookstore (YOU’VE GOT MAIL, much?) so he reads a lot and is also an avid runner. Two things I am not a huge fan of. I think I will see him again but I don’t know if there was a huge sexual spark there. We will see…

So look who is putting on the full court press…. Last night I came home and had a box waiting for me. 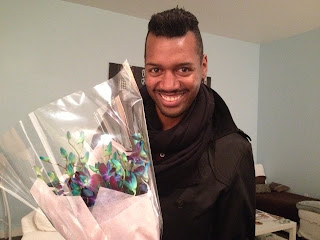 FLOWERS! OMG. I have never received flowers before. I have sent many boxes to the women in my life but have never received them. It was a touching gesture from none other than Mr. Rob. As Cyncere asked last night.. “ So is he back in the race?”… I’ll never telllllll.