I’m still awaiting to hear back from the SCI Clinic but I know everything is going well. This blog post I wanted to focus on my life and what’s currently happening. I mean, I can’t talk about surrogacy all day, everyday, right? The new thing that I told myself this year is that I would be more open to love. So I recently, joined match.com right before the beginning of the new year. I was actually going to give the a gift subscription to a friend but realized that all the (unfounded) reservations he had about the site and taking the plunge, I had as well. Why would I give this gift to him and not to myself. So, I decided to take the plunge. It has been going well so far. I told myself that I would go on one date a week, which I think is totally doable.

The week before Christmas, I went on a date with this cute guy named Jeff, 6’3, 28, architect, lives in Sacramento. The date was cool. I drove up to Sactown and almost died a couple of times because the torrential rain literally had its way with my car for the hour I was driving. We ended up going to a Sacramento Kings game since we are both basketball fans. After that, he drove me around Sacramento and showed me around. Then we went to a Mexican restaurant and talked for a couple of hours. He was a nice good guy but there was no spark there. At the end of the date, we kissed, hugged and went our separate ways. We decided to be friends.

The next date I went on was in LA during my time at my Gma’s house Xmas week. I had been messaging back and forth with this guy named Rob. It happened that Cece and I were going to be in LA, and once I told Cyncere about the potential, she helped organize our schedule to make the date happen. Sometimes I think she wants to see me partnered up more than I do. Anyway, Rob and I met at the Beverly Center and had Pinkberry while walking around the mall. We talked a lot and had a really good chemistry about us. He is also 6’3, 43, landscape business owner, and really into sports. We had great conversations and at the end of our date we kissed (and he is a great kisser). At the end of our date we left it open and told each other that we would definitely see each other again. He actually wanted to come up to SF for New Years Eve but couldn’t get away from work, so we decided to postpone it until a weekend that worked for us both. We decided that the second weekend of January would be good.

The second weekend of January I went out with two guys I had been chatting with on Scruff (a gay phone app used anywhere from meeting new friends to hooking up). The dates with Jeff/Paul (early 40s) were just ok. These guys were more interested in telling me about their lives and had no interest in mine. Again no spark. Guys who don’t ask me questions about my life/experiences raise a huge ego red flag to me and I pretty much don’t ever contact them again. This was the case with these guys.

Last weekend Rob came up to SF. I picked him up and we got something to eat at my favorite food court… Emeryville Public Market. We then went to a Golden State Warriors game on Friday night. Below is us with our free hats: 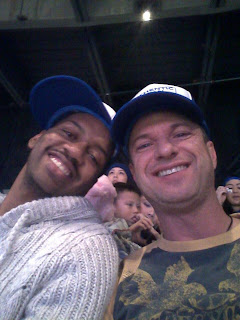 The next day he ran some errands with me and we walked the dogs together. Then we went to my bball practice where he briefly met my bball friends. We later met up with my friends at the new Gay Sports Bar Hitops , where we watched both NFL playoff games. That was a ton of fun! We all got along great. Sunday morning we went to Glide Church with Francis; the space was beautiful: 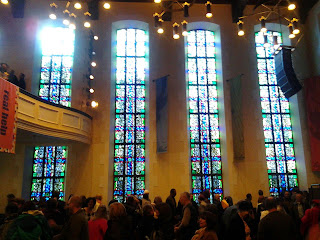 and then brunch with Cece. Below you will see a pic of us waiting for our Chicken and Waffles at Brown Sugar Kitchen: 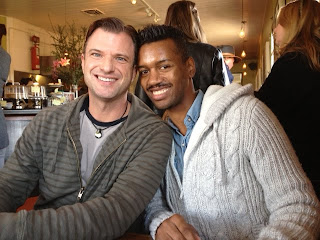 After that, he tried to turn up the full court MAN press and started fixing tons of stuff around the house, like my bathtub drain and my outside fence! Ohhhh, so this is how it feels to have a man around the house! Got it! Me like-y! We then went to Home Depot got new plants and took the rest of the afternoon redoing my small garden in front of my house. It looks gorgeous now. This was also the same weekend I found out that I was pregnant, which made things a little weird. I ended up telling him about the amazing news, which completely blew him away. He thought I would make an amazing father, which was very nice of him to say. He also said I was beaming when talking about it. I probably was!

Although he was a great, nice guy, I was unsure if I was completely attracted to him so I let him know that I would like to get to know him more, but that I would continue dating as this was a priority for me at the moment.

Tonight, I have a date with this guy on Scruff named Kevin (40, 6’2, Retail Business Owner). I will definitely tell you how it goes in the next post. Also, I have just joined Okcupid, which I absolutely love. I have been chatting with some interesting guys so I will probably be dating some guys from there as well in the near future. Stay tuned.
Posted by Anwar White at 11:17 AM